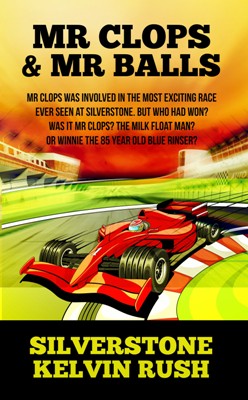 Mr Balls hated birthdays, so when his best friend Mr Clops arranged a few birthday surprises, Mr Balls wasn’t too impressed. But that soon changed when he found out what the surprises were. However, as usual when Mr Balls was involved, things didn’t go according to plan, and the birthday celebrations were turning into a disaster.

Mr Clops was involved in the most exciting race ever seen at Silverstone. Three cars finished the race all in a line, with not a fag paper between them. But who had won? Was it Mr Clops? The Milk Float Man? or Winnie, the eighty-five-year-old blue rinser? The excitement intensified as the results were announced.

When Mr Balls strutted onto the dance floor, cooler than John Travolta in Saturday Night Fever, he certainly didn’t expect to end up on his backside. But that’s exactly what happened, as he tried to pull off a classic Northern Soul backdrop. As if that wasn’t bad enough, Mad Dog Lucifer (The American Pit Bull Terrier) sunk his gnashers into Mr Balls’s backside, after Mr Balls had ran him over with his Vespa scooter. What on earth would happen next? Find out in this funny and entertaining story.