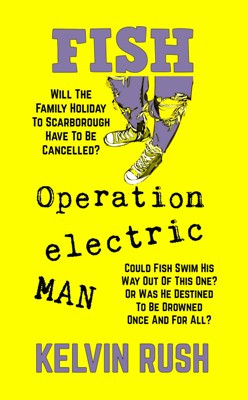 It’s 1978 and ten-year-old Martin Fisher (Fish) is in big trouble. He’s been up to mischief once again, but this time he’s gone too far. He’s broken into the electric meter at the family home and stole most of the money. The electric man has arrived to empty the meter, and Fish has disappeared without a trace. His brother Billy is frantically trying to find him, but Fish is nowhere to be seen. His Dad has gone ballistic, and if Fish can’t repay the stolen money, the annual family holiday to Scarborough will have to be cancelled. As if that wasn’t bad enough, his best friend Goody is about to get both his arms broken by Psycho Sid, who currently has a suspended prison sentence hanging over him. All in all it’s a right old mess.

Could Fish swim his way out of this one? Or was he destined to be drowned once and for all? And how would Goody escape from the violent clutches of Psycho Sid? Find out in this enthralling and entertaining story, about the trials and tribulations of growing up on a council estate in the north of England.

Fish – Operation Electric Man is available in Paperback and Download.